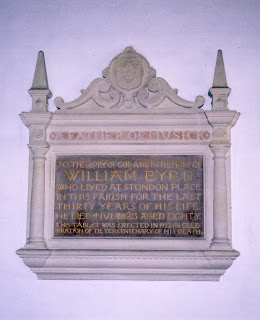 Thomas Tallis and William Byrd were the great composers of Elizabethan England. In 1575 they were granted the exclusive right to produce printed manuscripts. Byrd, we know, lived for the last thirty years of his life at Stondon Massey. He was one-time organist at the Chapel Royal and Court Composer to the Petre family at Ingatestone Hall.

A Catholic in a very Protestant era, Byrd was an unpopular man in the parish. The Churchwardens, who had significant power in those days, presented his name before the Essex Archdeaconry courts for failing to attend church and take communion, and for failing to pay church rates. This was a compulsory local tax intended to pay towards the upkeep of the church building and to provide for the poor of the parish.

It is highly unlikely that Byrd’s work was performed in the Church of England at the time and it is only during the twentieth century that his work has been rediscovered. We know that Byrd wished to be buried at Stondon Massey, but there is no evidence since no headstone was erected – in common with the early seventeenth century – and the Parish Registers for the period, unlike Blackmore, have been lost. St Peter and St Paul’s Church has a memorial to him commemorating the tercentenary of his death: he died on 4th July 1623. It bears the inscription “The Father of Mvsic”.